The Cost of Roadway Expansion 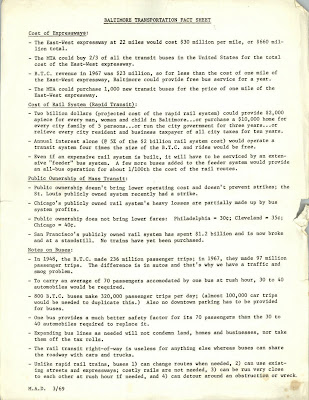 SCAR took a different stance on the cost of the road. Instead of looking at the relatively small cost of the road, they looked at alternatives. They believed that the overall funding could be used to effectively expand public transportation.
Posted by SCAR in Baltimore at 6:45 PM No comments:

The Structure of the Road 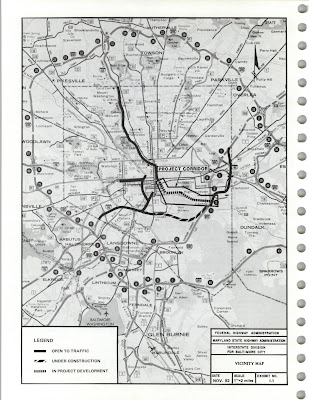 The structure of the road was one of the most important sticking points for SCAR proponents. The various road plans had very different impacts on both the residential and commercial areas of Southeast Baltimore. SCAR constantly attacked road plans that placed had a large impact on residential areas. This was a method of attacked that was voiced at design plan meetings.

The Urban Design Concepts group of Louis Sauer and Associates took a vested interest in reducing the number of displaced families. Each plan shows the detailed impact on residential properties. As a result, each plan held some contention based on the families that were going to be displaced. In addition, each plan held new worries for other residents of Southeast Baltimore. Citizens were constantly left wondering if their home would be in the path of the road. Housing united the citizens of Southeast Baltimore against the road.
Posted by SCAR in Baltimore at 7:25 PM No comments: 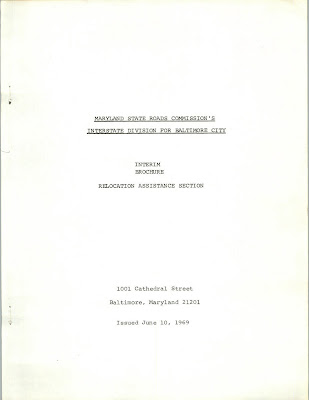 A large portion of the SCAR debate was geared toward counterarguments. SCAR took a clear stance against the road. In general, the Interstate Commission for Baltimore City formed the opposition also known as the counterarguments. The Interstate Commission formulated the logistics of the road plan including the relocation arrangements. The citizens of Southeast Baltimore fought these plans.

SCAR countered the City’s options during town hall meetings. The bulk of these meetings dealt with questions on the placement of the road. Residents constantly asked questions on the pathway and size of the road. These questions were more about housing than roadway viability. In reality residents were asking two sided questions. Will the road impact my home? Will I be forced to relocate? The city answered many of these questions in a series of relocation brochures. The brochure pictured above describes the value of homes and the process of home acquisition.

Road opponents analyzed these documents in order to diversify their argument against the road. Residents saw problems with relocation as cause for the roadway project to be abandoned. They reasoned that a poor relocation program meant less roadway interference on households. SCAR used this counterargument to direct the scope of the City’s actions and shift the debate in their favor.

Posted by SCAR in Baltimore at 8:46 PM No comments:

The driving force in the SCAR road fight was the citizens of southeast Baltimore. They relied on town hall meetings and protests to voice their opinion. The SCAR collection is replete with examples of petitions to the Interstate Commission for Baltimore City. The community organizations pleaded with Richard Trainor, then director of the Interstate Commission. The desperation for results led to public hearings on the issue. Thomas Ward, of the Mount Royal Democratic club, recalled that the volume of protesters often caused these meetings to last up to four hours. These continued protests formed the foundation of the community's voice in the road fight.
Posted by SCAR in Baltimore at 3:23 PM 1 comment: 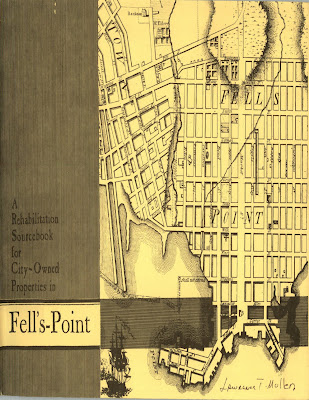 
The current charm and scenery of Fells Point attracts visitors from near and far each year. The historic buildings and cobblestone streets remind visitors of the early years in Baltimore's development. However, this approach to Fells Point is a relatively recent view. In the past 30 years historic preservation efforts have revived Fells Point and its physical appearance. The gentrification of Fells Point and the surrounding areas draws a strong contrast to the view of the area in the 1960's. During this time, Fells Point was struggling with trash cleanup, poverty, and decrepit buildings. In fact, many of the reports in the SCAR collection indicate that Fells Point met the federal definition of a devastated urban area, another phrase for a slum. These problems aided the argument for a road through Fell's Point.

The road fight garnered enormous help from preservation efforts in Fells Point. A local SCAR supporter named Robert Eney developed a source book to help classify and revive the historic buildings in Fells Point. He showed the intrinsic value and detail of the architecture in these buildings. This book encouraged local residents to take pride in their homes and neighborhoods. It also showed the City of Baltimore that Fells Point was a viable community with historic potential. This effort aided the push for a federally recognized historic district.

NOTE: I recently posted a main blog image. This image is a scan of one of the bumper stickers handed out during the road fight.
Posted by SCAR in Baltimore at 5:46 PM No comments: 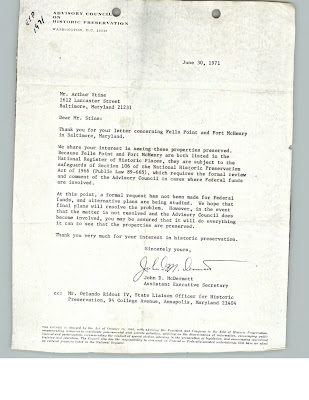 The central argument for the SCAR movement hinged on the fight for historic preservation. Citizens of Fells Point lobbied federal and state agencies on historic preservation to classify Fells Point as an historic district. This classification provided some protections for the area under federal law. This argument was outlined in a letter from John McDermott, of the Advisory Council on Historic Preservation, to a concerned citizen named Arthur Stine. The letter above shows that Fells Point achieved historic status by 1971. This provided for federal review of funds dedicated to highway development in Baltimore. Historic preservation was a driving force in this struggle. It halted the condemnation of homes and businesses and forced Baltimore to reconsider the placement of a road in Fells Point.
Posted by SCAR in Baltimore at 7:38 PM No comments:


In the late 1960's and early 1970's SCAR was one of many groups formed to stop roadway expansion. SCAR had a Baltimore counterpart in their road fight. A road that connected I-70 to I-95 was planned for west Baltimore. A group called Movement Against Destruction (MAD) was formed to stop this road. MAD and SCAR shared information to create synergy in their collective struggle.

The SCAR collection at the University of Baltimore contains sections of MAD documents that were used to model anti-road arguments. The collection contains a letter from MAD president William Durkin to Governor Marvin Mandel, which articulates the arguments against a road through West Baltimore. Durkin discusses alternative options for transportation exapansion, including the addition of light rail track throughout the city. SCAR used similar arguments to create an effective argument against a citywide problem.
Posted by SCAR in Baltimore at 6:38 PM No comments: